The Dodge Center Public Library was established January 22, 1909 by the members of the Dodge Center Fortnightly Club. The Fortnightly Club started meeting in 1896 with a group of 10 local women. Their first program was “Housekeeping in 1776 Compared to 1896” and featured new devices and suggestions for the modern housewife.

At the January 22 meeting, they decided that each Fortnightly Club member should contribute one book toward a library, which was then put in place upstairs above Dr. Garretson’s office. Hours were 2-5 on Wednesdays.

In May 1946, three members of the Fortnightly board met with the town board to discuss the possibility of the town taking over the library. In February 1957, the club offered $900 to the library if it could be open three times a week (Tuesday, Thursday, and every other Saturday). 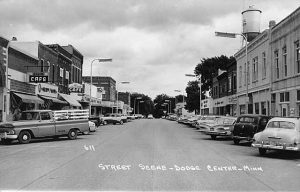 As of January 1964, library had 229 registered borrowers and was jointly sponsored by the town board and Fortnightly Club. The library was now located on Main Street, in the building that is currently occupied by the Hair Barn.

On September 21, 1996, the library moved to its current location at 13 1st Ave NW. Wilbur Donaldson contributed substantial funds to the construction of the new library and is recognized with a plaque outside the building. The building opened to the public on September 20, 1996 with a grand opening on November 24.

The current Dodge Center Public Library is a vibrant, active, welcoming place that includes collections of books, CDs, DVDs, games, snowshoes, knitting needles and crochet hooks and much more. The library hosts programs for all ages and interests and provides public computers and wifi for the community. Getting a library card is free, and all events at the library are free and open to everyone.